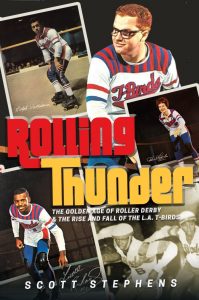 Scott Stephens received his first set of roller skates at age six in 1966 – and soon he was staging Roller Derby games in his backyard.

Growing up in Los Angeles in the 1960s and 1970s, it was impossible not to have heard about Roller Derby and the Los Angeles Thunderbirds, whose games were televised. In fact, many of the T-Birds were just as popular as those on traditional sports teams such as the Dodgers, Lakers, and Rams.

When Stephens started training at the new T-Bird Rollerdrome in Pico Rivera, it was mainly because he loved roller skating on a banked track. He had no idea that the Roller Games league was low on skaters.

From 1978 to 1981, from his seat on the infield of the track and on the track itself, Stephens was part of everything the games had to offer, including its underground scene of shadowy characters and venues, adrenalin seekers, and alternative lifestyles. He loved it! His interviews with key Roller Games figures such as Bill Griffiths, Sr., Bill Griffiths, Jr., Ralphie Valladares, John Hall, Buddy Atkinson, Jr., and many more, make this a one of a kind work.

Trace the history of Roller Derby and Los Angeles’ flagship team, the T-Birds, with this brilliant account highlighting the sport’s booms and busts.

Get Your Copy Now

If the names Ralphie Valladares, Skinnie Minnie Miller, Psycho Ronnie Rains, or Judy Sowinski mean anything to you, or your want to learn the origin story of the sport, this is the book for you. Scott Stephens, former skater with the T-Birds and founder of Raw Power magazine, chronicles the wild story of the Los Angeles Thunderbirds, the banked track heroes of Los Angeles. It’s a vivid book that melds history with the personal, telling the story of the athletes and behind the scenes characters who made roller games a part of pop culture and echoes today in modern derby.

Well worth reading whether you’ve been a fan of classic American roller derby or not. The story of the T-Birds and roller derby is long and complicated. You cannot simply say, “oh, it’s only roller derby.” The story goes much deeper than that. You’ll read about the big games and classic matchups that roller derby provided for the public’s entertainment. There is humor, pathos, drama, the triumphs, and  tragedies. You’ll also read about the in-fighting that took place both on the banked track as well as in Management’s Boardroom. Stories that are still debated today among roller derby enthusiasts.

Within these pages, is the story of the entertaining sport of banked track roller skating. At one time, Roller Games was on over 120 television stations in the USA, as well as in Canada, Mexico, Australia and Japan. There were sold-out games at the Fabulous Forum, Olympic Auditorium, L.A. Sports Arena, San Diego Sports Arena and other venues worldwide including a sold-out crowd of 51,000 people at White Sox Park in Chicago. Surely the best and most accurate book ever written about the history of the banked track sport. This former athlete has captured the heart and soul of the sport he participated in.

Scott Stephens created an impossible book that captures details, data, and people of the rise of the most popular roller derby team and it’s owners; the Thunderbirds! This is full of the people, places of a great all-American sports entertainment phenomenon. Learn about the behind the scenes tribulations, storylines, and injuries. Anyone who saw the T-Birds on TV must get this book. It is a treasure. and full of facts and truths. It keeps the grudges going right up to the end of the sport.

I have been waiting decades for someone to write this book. And former T-Bird skater, Scott Stephens, finally put the most famous Roller Games team’s history on paper. Scott’s book captures the glorious early years of the T-Birds along with “the missing years” and then all the way thru the various reincarnations of Roller Games until it was no more. There was as much going on off the track and behind the scenes as there was on the banked track. I would not only recommend this book to the diehard Roller Derby fan but anyone interested in gaining insight to a fascinating sport and its people. Scott gives a terrific insider’s view into what was, at one time, argumentatively the most popular form of entertainment not only in the Los Angeles area but in many other places around the country and around the world.

Scott Stephens is the CEO of Liquid Blue, Inc., and earned a bachelor’s degree from Alaska Pacific University. Since 1996, he has managed the musical group Liquid Blue and was the band’s lead vocalist and songwriter for more than fifteen years. He wrote the Billboard Dance Top-10 Hit Earth Passport. His band appeared in more than 120 countries and holds a Guinness World Record. He also spent four years as a professional Roller Derby skater, including two seasons with the Los Angeles T-Birds. Scott founded and was chief editor of Raw Power magazine in the late 1970s. He splits his time between surfing locales in San Diego, the Philippines, and Costa Rica. More information at https://scott-stephens.com/